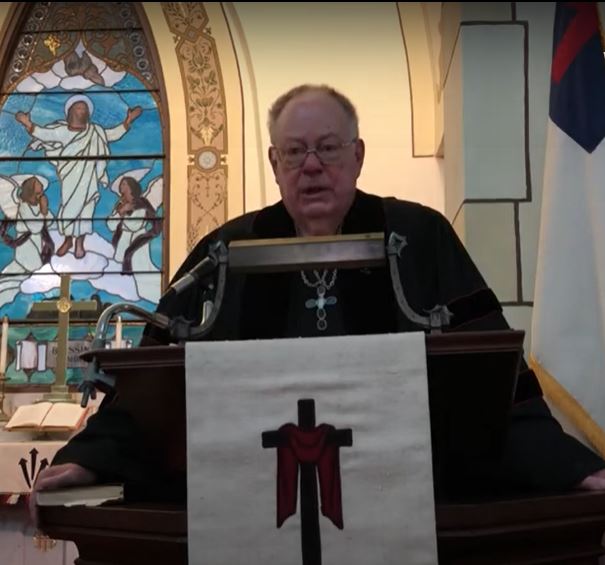 The Gospel reading for this Eastertide sermon is the book of John, chapter 17, beginning with the 6th verse, in which Jesus prays for his disciples and followers. Building on this, Pastor Tom Hartshorn talks about truth in today’s sermon — how different people perceive it differently, and how we often try to bend it to our own purposes. But the truth is that God is love, and we should embrace Christ and each other — especially in these divisive times — to truly live as Jesus intended us to live. “Science reveals we are one with each other and all of creation,” Pastor Hartshorn preaches. “Why not behave accordingly?”

After the sermon, Director of Music Joey DiGuglielmo shared a copy of Collier’s magazine from 1954, which reported on a survey that asked people to name their 10 favorite hymns. He asked the pew sitters to write down which hymns they thought might be on the list, then played parts of the songs and asked those present to guess which hymn he was playing. He also played several verses of each of the 10 hymns.

In order not to spoil the surprise, links will not be included here to the hymns, although it’s likely you will know the words to many of them. Jot down the hymns you think might be on the list before watching the music portion of today’s sermon and see how well you do.

For the record, Mary Hartshorn gets bragging rights — she had the most correct guesses of which hymns were on the list!

Click on the arrow in the image below to hear the sermon and music.