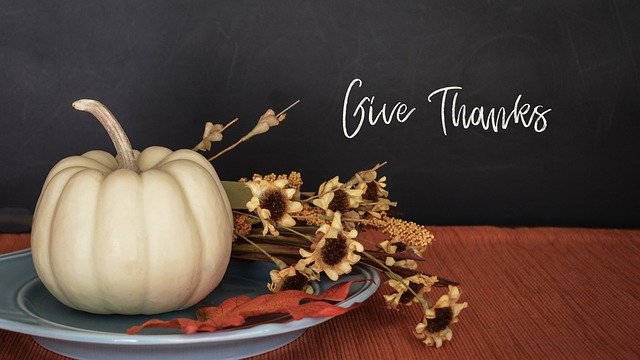 When we think of Thanksgiving, many of us think of Norman Rockwell’s iconic “Freedom from Want” painting, which shows a family gathered around the dinner table ready to feast on a large turkey. Indeed, many of our Thanksgiving memories may be very much like that painting. But the holiday is as individual as the people who celebrate it. We asked some members of the congregation to share their Thanksgiving memories with us.

Pastor Tom Hartshorn and his wife Mary shared a cherished Thanksgiving memory of when they introduced the holiday to some non-Americans:

“Certainly one of our best Thanksgiving memories included our new son-in-law. He is from India and came to the U.S. to further his graduate work in computer science at George Mason University. Several of his friends also came to study here.  None of them had ever experienced our American Thanksgiving traditions. They were all vegetarians. We made an effort to accommodate some of their customary foods, but most of them tried turkey for the first time. They toughed it out, and we had a great time learning about their ways.”

And they liked what they learned. “I think we ruined them, though, because several of our son-in-law Vinny’s friends and especially Vinny have since become regular meat-eaters. Vinny himself became quite addicted to cheeseburgers,” Tom and Mary report.

For Sylvia Kesecker, Thanksgiving means football. She would always be in the stands to watch the big Thanksgiving Day rivalry between the Martinsburg Bulldogs and John Handley Judges from Winchester, Va. This was especially true when Sylvia was in high school (Martinsburg High, of course), from 1953-57. She and her friends Mary Jo Morgan (nee Daniel), Phyllis Crouse and Barbara Kibler never missed the game.

Mary Davis calls Thanksgiving her favorite holiday, filled with many happy memories of her hometown of Bridgeport, W.Va.. But one that stands out involves the wisdom of her grandmother, a surprise guest at the holiday dinner in 1950:

“ In addition to my mom, dad, and I, we were expecting company to join us. Two of my mother’s sisters and my cousin, Jinny, were driving from Grantsville, a very small town in the center of the state. The big news was that Grandmother Hamilton, who was 83, was coming also. She seldom traveled from her home, so this was a treat.

“My mother prepared one of her fabulous dinners with the usual Thanksgiving treats. We had a wonderful time laughing and enjoying each other’s company. My cousin and I managed to behave ourselves.

“After dinner Jinny and I were free to go. It was a cool, sunny day so we went outside. The two of us always seemed to have a lot to discuss and to launch into giggles. We looked forward to spending the evening together, but that was not to be. Grandmother was worried the weather was going to change, so they headed back to Grantsville. On a sunny day like that, how could we possibly have bad weather?

“The next morning when I woke up it was snowing. It was the beginning of what became four feet of snow. Yes, Grandmother was a wise woman.”

My Thanksgivings vary, from traditional family affairs to “Friendsgivings” to spending the day alone.  But the one that stands out in my mind is from when I was a little girl.  My dad worked as an assistant supervisor in the boiler room of a textile mill, and he was often able to pick up additional shifts to earn extra money – especially on the holidays.

On that particular Thanksgiving, Mom got up in the wee hours of the morning to get the turkey in the oven so we could have an early Thanksgiving dinner. Afterward, she loaded turkey, mashed potatoes, stuffing – the whole meal – into a picnic basket for Dad to take to work. It was bad enough that the men who had to work on Thanksgiving would miss spending time with their families; she didn’t want them to miss a good meal as well. I remember thinking what a nice surprise that was for my father’s co-workers and how kind my parents were to think of it.

To me, Thanksgiving is not a stand-alone holiday, but rather the gateway to a wonderful season of giving and goodwill. Let’s be grateful for all that God has given us, and then take those blessings out in the world to enrich others as well.

Lisa Gough is a member of the Christ Reformed United Church of Christ’s Website Committee.